Many cooks swear by cast iron pans, but eggs can quickly turn into a sticky mess that is hard to remove.

Eggs often stick to cast iron during cooking, but there’s a simple way to clean them.

Read on for our step-by-step guide on exactly how to clean eggs off a cast iron pan, and see for yourself how easy this chore is to conquer.

So you’ve made some delicious eggs in your cast iron pan, but now you need to know how to clean eggs off a cast iron pan before you can cook again.

Using a scraper and some salt, you can get your pans clean without damaging the seasoning.

This trick works with all fully-seasoned cast iron pans and doesn’t take long at all.

Let’s go step by step on how to get those eggs off, and what you can do differently in the future.

Using a scraper, you can easily remove the bulk of the stuck-on egg residue and any other chunks of food that remains. 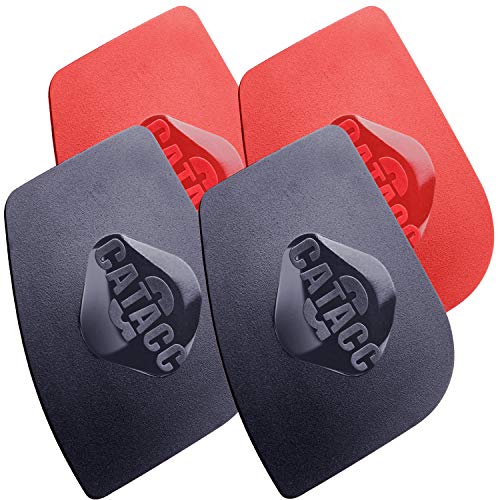 For best results, use a plastic scraper, commonly found in any home goods department. Plastic is better than metal because it won’t damage the top layer of seasoning.

You can also use a stiff plastic or nylon brush for this step, but avoid brushes with hard metal bristles that can scratch the seasoning on your pan.

As you’re scraping, keep in mind that you don’t need to get the pan perfectly clean at this point.

We’ll be doing a bit more cleaning before the process completes.

For now, focus on getting the majority of the gunk off and rinsed away so you can see any other areas that might need more scraping.

Some people like to use a scrubby sponge for this step which will work, but note that the sponge might hold on to some egg bits and start to smell.

Once you’ve finished scraping, fill the pan with hot water and let it sit just long enough to warm the pan.

Warming the pan this way should only take 30-60 seconds at the most.

While some sources claim that you can use soap on your pan, it’s still best to avoid washing with soap, as it dissolves part of the layer of seasoning.

Dissolving part of the seasoning on your pan directly reduces how non-stick it is when it comes to cooking sticky foods like eggs and pancakes.

Instead, put some coarse kosher salt and a teaspoon of neutral oil in the pan and use a scrubby sponge to rub the mixture across the surface of the pan.

The salt and oil mixture should remove all of the stuck-on bits of egg that remain on your pan, and you can add more salt or oil as needed to finish the job.

As a bonus, using oil to clean the pan helps preserve the seasoning and adds a layer of protection against rust and food.

If there’s still stuck-on food, you can rinse away the salt and oil in the pan and add more salt for another round of scrubbing.

Coarse salt works much better than fine salt for this task.

Once the pan is clean and free from the food you’ll want to give it a thorough rinse.

Check to make sure all of the salt particles and food rinse away but don’t worry about the oil leftover.

Once you’ve rinsed the pan thoroughly, use a kitchen towel or paper towel to dry the pan immediately. Standing water on a cast iron pan can encourage rust and cause damage.

As you dry the pan, you’ll rub in what remains from the oil used during the cleaning process, and this will help to fortify the seasoning on the pan.

Once the pan is completely dried, it is ready to be put away. Never place a damp cast iron pan in a cupboard or other enclosed area as it might mold or rust.

If you don’t want to use a kitchen towel or paper towel, you can place the pan on the stove on very low heat and allow the warmth of the pan to dry the surface.

This drying method takes longer than a paper towel, but it can also help fortify the seasoning of your pan as the oil you used during the cleaning process becomes part of the pan.

Seasoning your pan again is an optional step, but if the egg stuck to your pan caused damage to the seasoned top layer of your pan, it’s a good insurance policy.

To re-season your cast iron pan, place a small amount of neutral oil on a paper towel and rub it all over the pan. It’s ok to be generous with the oil, but the pan only absorbs a certain amount.

Once the pan is thoroughly coated with the oil, you can use a clean paper towel to wipe away the excess and allow the pan a few minutes to sit and absorb the oil before putting it away.

Re-seasoning your pan is an optional step because the salt and oil mixture shouldn’t cause any damage during the cleaning process.

Adding more oil to the surface of your cast iron pan does add valuable protection and often makes it harder for food to stick during cooking.

Covering the pan in oil during the seasoning process also helps to protect the pan from rust. It’s fine if you don’t re-season the pan every time you clean it, but periodic seasoning is necessary.

It’s best to clean a cast-iron pan right away after you use it. When you clean the pan right away, it’s easier to get all of the food bits off with less scrubbing and salt.

Coating the pan in oil also protects the surface during cooking and storage so your pan won’t rust or develop mold. Never put a damp cast iron pan away until it’s bone-dry.

When you store your cast iron pans, you can put a single piece of paper towel between them. This towel helps protect the surfaces of the pans but also absorbs moisture.

When you cook, use more gentle utensils made from materials like wood, bamboo, rubber, and silicone. These materials won’t damage the surface of your pans as easily.

Another tip is to avoid storing food in your cast iron pan.

Cast iron pans are not in any way suited for food storage, and many foods can easily damage the pan and cause your food to turn black.

It’s also a good idea to think through what you’re going to cook in your cast iron pan and decide the best way to use heat, oil, and other variables in the process for the best result.

For example, it’s easy to bake in a cast iron pan, and the results include delectably crisp edges on items like:

Cast iron pans are an excellent choice for cooking steak, chicken, or fish as well.

Making fried foods also works well in a cast-iron skillet, as the oil prevents the pan from absorbing any odors.

Should I Avoid Cooking Eggs in my Cast Iron Pan?

Now that you know how to clean eggs off a cast iron pan, you’ll be relieved to know that there’s no reason to avoid cooking your eggs in a cast iron pan in the future.

It’s possible to cook eggs without them sticking to a cast iron pan, but it requires using a bit more oil than you otherwise would.

You’ll also want to turn up the heat a bit more than you would with other types of pans, and allow the pan plenty of time to warm up.

Using neutral oil, you can put a thin layer in the bottom of the cast iron pan and allow it to get relatively hot. A drop of water placed on the oil-covered pan should sizzle on impact.

Once the pan is that hot, you can carefully add your eggs. The oil in the pan might splatter a bit when the eggs touch the surface, but turning down the heat a touch helps lessen the spray.

If your eggs stick, just clean the pan again using the method we covered and add a layer of oil after cleaning.

Improving the seasoning on your pan will also help prevent food like eggs from sticking and often means you’ll use less oil while cooking.

Once you learn how to clean eggs off a cast iron pan, you might find yourself using the pan more often to create delicious lacy eggs and other enticing foods.

Cleaning a cast iron pan is easy enough with a plastic scraper, salt, and oil, but you can also use a sponge or stiff brush to get the job done.

Once the pan is clean, make sure to dry it thoroughly, and consider coating it in a thin layer of neutral oil for added protection.