Gordon Ramsay is an internationally recognized personality in the world of culinary arts.

He has been awarded multiple Michelin stars in his career for his exceptional capabilities as a chef. He’s also a brilliant entrepreneur and has more than 30 diverse restaurants all over the world.

Apart from that, he has starred as a judge in many cooking shows, which only adds to his credibility.

Since he’s one of the most reputable names in the culinary industry, it’s only natural to be curious to wonder what pans does Gordon Ramsay use.

Gordon Ramsay recommends using the ScanPan frying pan which uses little or no oil. It’s safe, PFOA-free, and sustainable. It’s dishwasher safe and can also be used in the oven. It weighs a little over 2 pounds and can be used for browning, braising, searing and deglazing. 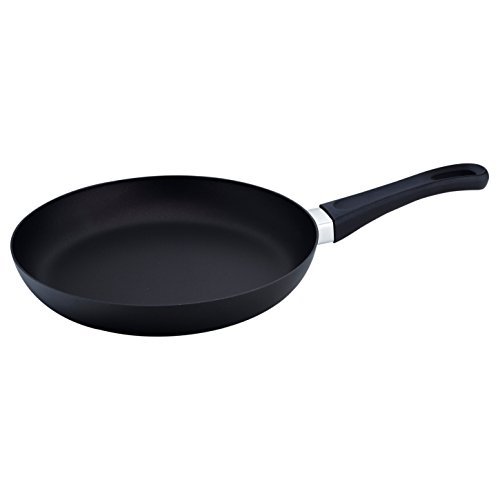 Let’s take a look at what he recommends when it comes to cooking pans!

Here are a few recommendations Gordon Ramsay has given about useful pots, pans, and cookware to use in the kitchen.

Ramsay Suggests to Only Buy a Few Pans

Gordon Ramsay holds the opinion that cooking delicious food doesn’t always mean you have to spend a fortune on buying fancy equipment. He understands that every person has a different budget and therefore suggests that you only buy a few pans.

According to Ramsay, you don’t need to have 10 different saucepans to cater to your cooking needs. Instead, you only need 2. If you have 2 saucepans—one small and one large one—you will be able to cook pretty much everything in them.

The small saucepan will be great for heating liquids or cooking rice. The large saucepan, on the other hand, will give you the extra space you need for making pasta or cooking in bulk.

Gordon Ramsay always suggests you invest your money in qualitative pans instead of buying cheaper ones. He recommends you to buy the best quality of pans you can afford. Since they are of high quality, they will last you for years if you take care of them properly.

This way, it will be a one-time investment as you won’t have to buy a new pan anytime soon. Hence, you will end up saving money in the long run.

Ramsay recommends buying a versatile pan so that you can use it in many different ways in the kitchen. It is better to buy a multi-purpose pan that you can easily pop in the oven or place on a grill rather than buying a pan you can only use to cook food on top of a stove.

For this reason, Ramsay recommends buying an ovenproof frying pan with a metal handle as it will allow you to cook like a professional. The metal handles offer much higher heat resistance so you can easily use your frying pan for baking food in the oven.

This way, the use of your pan is not limited to the stove and you don’t have to stress about damaging the handles in the oven.

The only problem with metal handles is that you have to be extra careful when taking your pan out of the oven. Remember to use oven mitts to avoid burning your hand as the metals handles can become very hot after baking.

According to Gordon Ramsay, it is important to buy a pan with a lid.

Ramsay Advises to Check the Bottom of a Pan

The simplest way to check the quality of a pan according to Gordon Ramsay is to check its bottom. The heavier the bottom is, the better the pan will be at conducting heat.

This means a pan with a heavy bottom will not only cook your food faster but also cook it better due to a faster and even distribution of heat.

On the other hand, if the bottom of a pan feels light, then it may not be ideal for cooking. This is because there are higher chances of your food burning quickly in a pan that has a lighter bottom.

There is no denying the comfort and convenience of a non-stick pan. We all love to be able to cook our food with minimum oil without it sticking to the surface of the pan.

A non-stick pan is also ideal for people who want to make fat-free dishes to follow a healthy lifestyle. This is why non-stick pans are a must-have item in the kitchen according to Gordon Ramsay.

Copper pans do a lot more in the kitchen that just looking aesthetically pleasing to the eyes. Copper pans are mainly preferred by professional chefs like Gordon Ramsay due to their exceptional ability to conduct heat.

These pans offer even distribution of heat so you can finally say goodbye to hot spots.

Furthermore, copper pans are ideal for cooking because they can help you reach very precise temperatures. A copper pan will quickly alter its temperature as soon as you adjust the temperature on your stove. T

his will give you more control over the temperature of the pan and you will be able to brown your food to perfection.

Last but not least, Gordon Ramsay also believes that stainless steel pans are worth buying. This is because stainless steels pans are very sturdy and offer great durability.

These pans can be used for longer periods of time as they don’t chip, rust or even stain easily. This quality makes them very appealing to cooks all around the world.

Another benefit of stainless steel pans is that they are nonreactive which makes them good for health. Stainless steel pans do not react with the food you cook in them so they never release any chemicals or toxins into your food.

Hence, stainless steel pans are perfect for preserving the true flavor of your food.

What Makes Gordon Ramsay so Famous?

Gordon Ramsay has successfully turned his name into a world-famous brand over the course of his life and here are a few reasons why.

Gordon Ramsay started his career by working under some of the top chefs in the world. He initially apprenticed at Harvey’s in London to work under Marco Pierre White and then moved on to learn from several other big names like Albert Roux, Joel Robuchon, and Guy Savoy.

In 1993, Gordon Ramsay became the head chef of a newly opened restaurant in London named Aubergine. His hard work and exceptional talent began to receive recognition as he earned this restaurant a two-star Michelin rating within 3 years.

Later, in 1998, Ramsay set out on the path of independence by opening his very own restaurant in London. This restaurant quickly became the ultimate go-to place for many high-end food enthusiasts.

This restaurant later also received a three-star Michelin rating which is considered to be highly prestigious in the restaurant business.

After this, Gordon Ramsay began to expand his business aggressively to create a global chain of restaurants. He currently runs successful restaurants in many cities of the world like Dubai, Doha, Las Vegas, Bordeaux, and Hong Kong.

Gordon Ramsay entered the world of fame by becoming part of a television show named Hell’s Kitchen in 2005. His aggressive style of criticizing the chefs on this show instantly caught the attention of the public. As a result, he started to grow in popularity.

Since then, Gordon Ramsay has produced and judged many television shows including Master Chef, Master Chef Jr., and Kitchen Nightmares.

So far in his television career, Gordon Ramsay remains to be his authentic self and is never afraid to give rude remarks. Moreover, he also inspires people to cook delicious food by creating mouthwatering dishes on television.

Besides cooking, running restaurants, and giving harsh criticism on cooking shows, Ramsay has also established himself as a published author. He has written a few best-selling books including his autobiography named Roasting in Hell’s Kitchen.

This shows us that Ramsay believes in diversifying his sources of income and that is how he has gradually built his enormous net worth of about $200 million.

Before you can begin trying to cook like Gordon Ramsay, you definitely need to have access to the right equipment in the kitchen.

Only then you will be able to get the best results while trying out one of his delicious recipes.

We hope this article proves to be helpful in informing you about the different guidelines Gordon Ramsay has shared about cookware. Now that you’ve read all the suggestions he has given above, don’t hesitate to invest in the quality cookware he recommends.

After all, these tools are crucial for helping you pursue your passion for cooking.

You may also like the following articles about cooking pans: