Do you want to bake cupcakes but don’t have a cupcake pan? It may seem at this point that you’re out of luck, but that’s not true.

You can bake delicious cupcakes with just cupcake liners and a regular baking tray. Here’s a guide on how to make cupcakes without a cupcake pan.

How to Make Cupcakes Without a Cupcake Pan

Here are the steps to make cupcakes if you don’t have a cupcake pan:

Step 1. Stack Your Cupcake Liners to Make Them Stable

Stack your cupcake liners to make them into a stable structure.

This way, you’ll ensure that the cupcake liner holds the cupcake batter well. You don’t want the paper liner to topple when it’s in the oven. 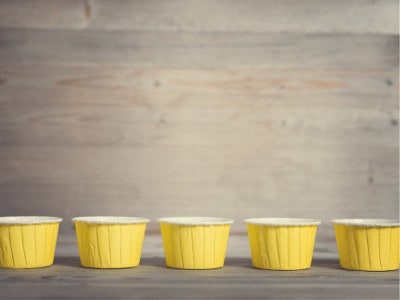 Making the liners into a stable structure will also help the cupcake have an even shape.

You can use two types of cupcake liners for this purpose. You can use paper liners or foil liners. It’s best to go with foil liners in this case.

Foil liners are a lot more stable than paper liners. Therefore, they will stay upright during the baking process.

You may need to stack only 2 foil liners to keep it stable. If your foil liner is strong, even one-liner per cupcake may suffice.

On the other hand, if you’re using paper liners, it’s best to stack 3 liners one over the other.

This way, the paper liners should be able to stand without any support. If the stacked liners still feel too flimsy without the batter in them, stack another one.

If you’re not satisfied with the stability of the cupcake liners, you can use mason jar lids. These lids provide additional support and will stop your cupcakes from toppling over.

You’ll need as many mason jar lids as the number of cupcakes you’re baking.

Remove the Flat Part of the Lids

If you’re using the lids, remove the flat part of it.

This way, you’ll be left with just the metal ring. So, before you arrange your cupcake liners in the tray, place these lids underneath them.

The great thing about these lids is that they’re just about the size of a liner.

Thus, the liner won’t have much room to move about when it’s in the lid. If there is a bit of extra space, place the liner in the center of the lid.

Step 2. Set the Cupcake Liners in the Baking Tray

Now that the cupcake liners are stable, you must set them in the baking tray. Place each liner in a single line along the length of the pan.

Keep adding enough lines until the entire pan is full. When you arrange the cupcake liners, make sure they’re close together.

It’s okay for them to touch each other slightly too. Cupcake liners leaning against each other will provide additional support.

Don’t Overcrowd the Cupcake Liners in the Baking Tray

You must ensure, however, that the liners aren’t too cramped in the baking tray. It’s possible that you may get odd-looking cupcakes as a result.

Also, you should try and use a baking tray with a lip. This way, the cupcake batter will stay in the tray if it spills.

Thus, your oven won’t become a mess, and you’ll save time and energy during cleanup.

Step 3. Add the Cupcake Mix to the Liners

The next step of this process is to add the cupcake mix to the liners. Make sure that the cupcake liners are sturdy and properly arranged before you move on to this step.

It will be difficult to move the liners once you fill the cupcake mix in them.

Mix your cupcake mix in a bowl separately.

Once that’s ready, hold the bowl over the cupcake liners.

The mix should fill about 3/4 or 2/3 of the cupcake liner. This measurement is also about the same you would use for a regular cupcake pan.

Don’t exceed that amount when filling the cupcake liners. The cupcake mix will rise when it bakes, so you must give it enough room to do so.

You should also avoid over-filling the cupcake liners because they may tip over.

This mistake may weaken the liners’ center of gravity (which means that it may not stand very well during the baking process).

Your cupcakes will get ruined if they topple, and you’ll have to clean the tray thoroughly afterward.

You should also make sure that each liner has about the same amount of cupcake mix in it.

If the quantity varies, the cupcakes may cook at different paces. So, you may end up with a few runny cupcakes or really dry ones.

Step 4. Place the Baking Tray in the Preheated Oven

Before you can begin the baking process, you must preheat your oven.

This step will already be mentioned in your recipe, but we felt it’s important to reiterate this point.

The temperature you must set your oven will depend on the cupcake mix recipe.

Move the Baking Tray Slowly When Placing It in the Oven

Place the baking tray in the preheated oven after you fill all of the cupcake liners.

Make sure to move the tray slowly when placing it in the oven. Considering you’re not using a cupcake pan, the liners can topple if you’re not careful.

Set the Timer on the Oven and Let It Bake

It’s also important to note that you should stick to the temperature setting in your recipe. The cooking process with this method is the same as using a metal cupcake tray.

Use a Toothpick to Check if the Cupcakes Are Ready

Once the timer rings, check if the cupcakes are ready. Use a toothpick to pierce the center of the cupcakes. You don’t need to check each and every cupcake.

Just check the ones in the corners and the one in the center. This should give you an idea if all of them are ready. You’ll only need to do this process if you suspect that your oven doesn’t distribute heat evenly.

Remove the toothpick and check if there are any traces of the mix on it.

If the toothpick comes out wet, then it’s not ready. However, if the residue looks bread-like, then you need to get the cupcakes out of the oven.

After the cupcakes are ready, place them aside and let them cool. It’s best to remove them from the baking tray as soon as you get them out of the oven.

The heat from the tray may increase the moisture buildup, which, in turn, may make the liners peel away.

Let them rest for about half an hour before you consider eating them.

You should only eat so soon if you don’t mind eating relatively warm cupcakes.

If you’re planning to frost your cupcakes, you should make sure to let them sit for more time than otherwise.

It’s best to let it cool off for at least an hour after you remove them from the oven. If your kitchen is relatively warm, give it a little more time.

More often than not, a cupcake feels pretty cool at the top. However, the heat may still be inside. So, if you try frosting it on a cupcake in that state, it’s going to start melting.

As a result, it will become difficult to create a proper shape on the cupcake.

The frosting may also fall off in a few minutes if not right away if it melts. What’s more, it may even ruin the texture of the frosting itself.

While it’s important to have the right tools to create anything, let alone baking desserts, you can still experiment without those tools and create something that can be almost as good, if not of the same quality.

You just have to make sure that you make certain adjustments, and are meticulous with how you carry out each step.

So, your takeaway from this article should be that no cupcake tray definitely does not mean that you can’t make and, of course, eat cupcakes.